stew reads at the fastest rate of 265 words per minute.

it's a given that felicia reads at 260 word per minute and on connie's graph we can see that she reads 200 words per minute. since stew's table tells us that he read 795 in 3 minutes, we can divide 795 by 3 to find out how many words he reads per minute. 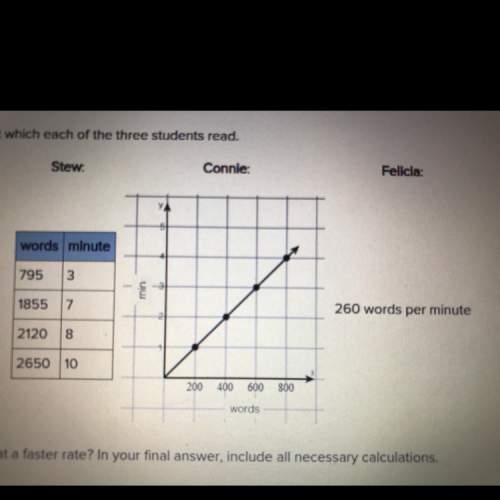 Chemistry, 31.08.2019 11:20
Which consequence of new fishing methods had the most immediate impact on the environment? a. diesel engines on newer ships contributed to glob...

Chemistry, 31.08.2019 11:20
What type of substance would salt water be classified as? select all that apply. a. heterogeneous mixture b. homogeneous mixture...

History, 31.08.2019 11:20
What was the name given to low cost, multifaceted dwellings in the cities in the late 1800s?...
More questions: Mathematics Another questions